The generally accepted procedures pertaining to, and associated with, the preparation and exposure in a view camera of a four inch by five inch film sheet. 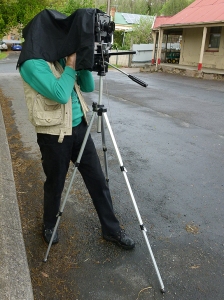 Does the title sound a bit long-winded? Well it’s meant to, and alludes to the fact that the exposing of a single sheet of film using a 4”x5” large format view camera requires a lengthier time process than putting the camera to your face, composing and pressing the shutter release button.

When I was setting up the Arca Swiss at the Club’s 30th anniversary function, former member David White said to me: “I can understand why no-one uses them anymore. By the time you’ve set up ready to take a photo everyone’s gone to sleep!”

There’s some truth to that statement; it takes time and care to set up the camera before taking an image, yet using one of these cameras is, to me, the very essence of photography. It’s a very manual process that requires forethought and especially pre-conception of the final result amongst other things.

Let’s firstly look at the basic structure of a view camera, which exist in a variety of (mainly inch) formats such as 4×5, 5×7, 4×10, 5×12, 8×10, 11×14, 7×17, 8×20, 12×20, and 20×24. There are also a number of metric backs available, and some backs that incorporate roll film. Just think about that massive 20×24 for a moment, and the fact that a contact print would produce a photograph big enough for any international exhibition. The envisaged cost of the each sheet of film brings one back to earth somewhat! Do enlargers exist to take such a huge negative?

The components of these cameras remain relatively unchanged from the very earliest days of photography.

There are three main components:

The camera body, incorporating an expandable bellows that allows both the front and rear standards to be moved forward or rearward along the rail.

A lens board to attach to the front frame. This frame-lens combination is referred to as the front standard.

A focussing board incorporating a moveable (and generally removable) ground-glass focussing screen. This frame-film board combination is referred to as the rear standard.

I’ll discuss each of the above in turn. 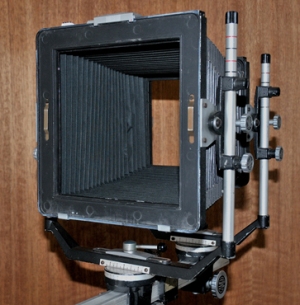 The camera body comprises front and rear frames to which an expandable bellows is attached. These frames are attached to a rail – hence the alternative term for this type of camera. Most view cameras allow the bellows to be separated from the frames. This is handy should there be a need to repair a bellows. Both the Arca Swiss and Cambo allow removal of the bellows. 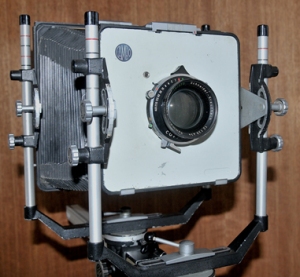 The front standard is the lens section of the view camera. Several movements that allow swing, tilt and shift are incorporated into the front standard. One thing different with view cameras to “normal” cameras is that there’s no focussing ring on the lens. The reason is simple enough, in that moving the front standard forward or rearwards will achieve focus so there’s no need of a focussing mechanism within the lens structure. Moving the rear standard achieves the same thing. The focussing ring in the lens of any camera with fixed lens, or SLRs and DSLRs, simply achieves the same result by moving the lens elements to enable focus.  What we do get with the view camera lens is the shutter ring and the aperture ring. All shutters with this type of lens are leaf type, although I understand there are some view cameras that incorporate shutter blinds in front of the film board. The fastest shutter with the majority of view cameras is 1/500th second. The use of leaf shutters allows flash units to be used with any shutter speed. 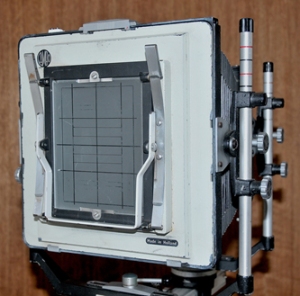 The rear standard’ is the film section of the camera, with this standard also allowing the three movements of swing, tilt and shift. The rear standard includes a ground-glass focussing screen and also incorporates the means by which the film holders are attached in order for a sheet of film to be exposed. 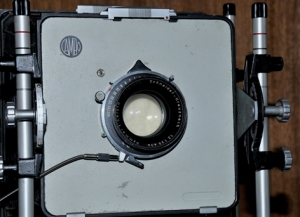 View cameras, like any camera, require the subject to be focussed unless an out-of-focus effect is desired. Focussing requires the image to be viewed on the ground-glass screen before inserting the film carrier. In order to have light fall on the ground-glass screen it’s necessary to open the leaf shutter . A special button in the lens mechanism (also called a preview lever) allows this.

It’s also recommended that the greatest amount of light be allowed to reach the ground-glass screen and this is done simply by opening the aperture to the maximum available. The maximum aperture for most 4×5 camera lenses is f4.5 / f4.7 with the aperture stops ranging from f4.5 to f64. The 121mm lens on the Arca Swiss has an aperture range of f8 to f64 and the 210mm lens on the Cambo is f5.6 to f45. The 210mm lens is therefore the “faster” of the two lenses. 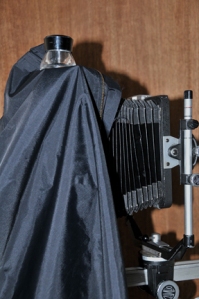 Whilst it’s possible to view the ground-glass screen in ambient light conditions, the image clarity is achieved with greater ease by using a hood and a lupe. The difference is much the same as trying to view the screen on a mobile ‘phone in bright light compared to being inside a darkened room. I use an old daylight change bag to put over the camera body and my head, and the lupe is held against the ground-glass screen to achieve critical focus. 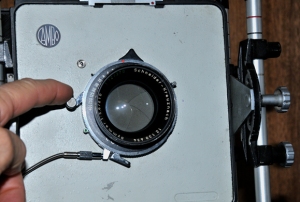 The next step is for the leaf shutter to be closed and light readings taken to determine the exposure after the image has been focussed on the ground-glass screen. With the combination of shutter speed and aperture on the lens set, the film carrier can then be placed on the rear standard. This is done by pulling a lever that moves the ground-glass screen away from the camera body, providing a gap into which the film carrier is placed. Moving the lever back to its normal closed position will then hold the film carrier firmly in position. 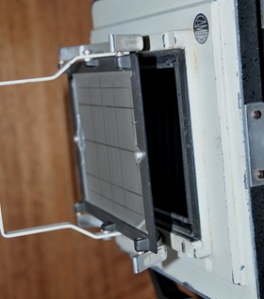 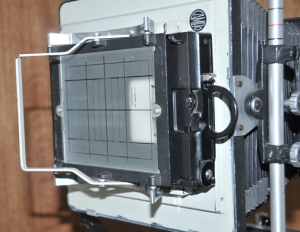 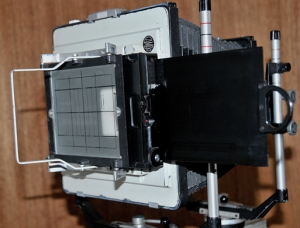 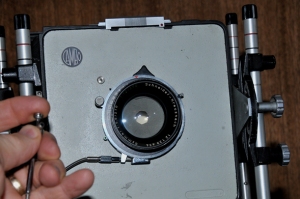 The whole process is then repeated for any subsequent exposure.

The film sheet is then removed from the carrier in total darkness and placed in a developing tank and processed in the same way as any other film of its type.

Sheet film doesn’t have any form of numbering therefore careful recording of image details is essential. It’s also useful to record the developer used and the details of development. Filing should also be carefully planned.

View cameras are unlike most other cameras and especially 35mm cameras (film or digital) that require the camera body to be turned from horizontal to vertical in order to change from landscape to portrait aspect. Turning the view camera body by 90 degrees is not necessary with view cameras, as the rear standard can be quickly disengaged from the camera body and replaced in the alternative aspect. This takes only a few moments. It’s therefore unnecessary to use a tripod that has a head that incorporates the movement that changes the camera’s aspect from landscape to portrait. The type of tripod used for movie cameras is ideal for view cameras for this very reason.

Next article:  The Movements – Swing, Tilt and Shift.