Perspective is a ghastly mistake which it has taken four centuries to redress. (Georges Braque)

Georges Braque was a 20th-century French painter. He played a role in the development of Fauvism and Cubism.

Perspective  is a graphic representation in 2 dimensions,  of an image as it is seen by the eye in 3 dimensions.  The word comes from a Latin root meaning to see through.  The two most characteristic features of perspective are the diminution of size with distance and  foreshortening.  Forshortening is the distortion of objects as they recede.  For instance a foreshortened circle will appear to the viewer as an ellipse or oval.

In about 1413 the Italian artist Filippo Brunelleschi, demonstrated the geometrical method of perspective.  He painted the outlines of various Florentine buildings onto a mirror.  He observed that the straight lines when extended inevitably converged on the horizon line.

An artist may spend some time ruling up the canvas with straight lines in order to give a realistic representation of perspective.  The photographer on the other hand just presses the button and the camera captures the perspective in an instant.

The horizon line will cut through objects at the same height above the ground as the camera lens (eye height of the photographer).  That is if the ground is flat.  Thus it will be easy to tell whether a photograph is taken from a standing height, by looking where the horizon cuts through familiar objects.

Of course reality is 3d and our eyes are curved and not flat.  So it is artificial to represent a 3d image on a flat 2d surface.  After creating a breakthrough in realistic painting,  we must  recognize that perspective results in distortion of images.

It is worth looking at extreme examples of perspective to understand how the process distorts an image.  Extreme perspective exists when straight lines appear curved as you get very close, or you might find with a fish eye lens.  This does not comply with the technique described by Filippo Brunelleschi, however it is correct perspective.

Not only can we get extreme perspective, but it is possible to create impossible perspective.  This is where where 360 degrees are represented in a single image.  This is possible nowadays with computer programs that stitch photographs together, to represent 360 degrees both horizontally and vertically.    If you try and represent everything seen from a certain point, you will have difficulties transposing it onto a flat 2 dimensional plane.  The best way to think of the image is as a sphere.  The problem is to map the inside of this sphere.  It is essentially the same problem as showing the landmasses on the outside surface of the earth.

An atlas will display a map of the entire earth using a projection, like the Mercator or  gnomonic  projection.   There are many different projections because none of them are perfect.  Each projection may represent some feature accurately at the expense of another. 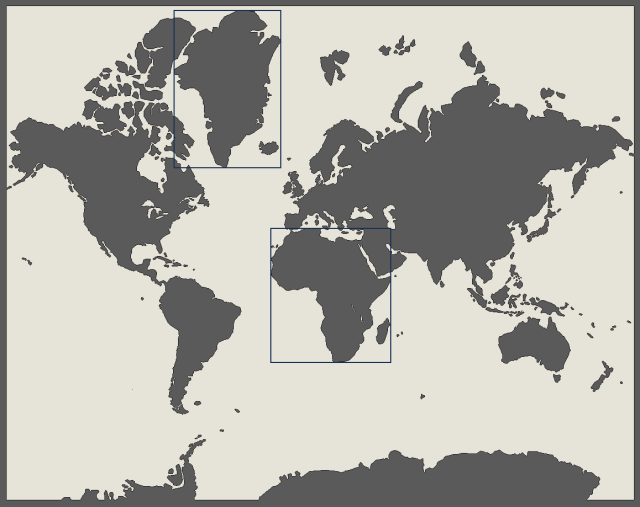 In the Mercator projection (above) a reasonable degree of accuracy can be achieved for countries near the equator like India or Africa.  However Antarctica and Greenland are not only considerably larger than they should be, but also quite distorted in shape.   Likewise there is a tendency for lenses to represent objects in the centre faithfully while distorting objects at the edge.  This effect is most marked with wide angle lenses.

If everything visible from a given point is a spherical image, then what we see with our eyes, or with the camera is just a portion of that sphere.  The focal length of the lens and the size of the sensor determine how much of that sphere we will be viewing.  If it is a large portion, say 90 degree angle of view (22mm lens FF) , there will be some perspective  distortion.  It is not possible to flatten this curved image out without some distortion.  However a magnified telephoto image representing only 4 degrees (600mm FF) is much easier to flatten out and will suffer very little distortion.

To summarize, wide angle lenses will suffer distortion at the edges.  This is because the arc of vision is curved, while our sensors are flat.  It is often stated that telephoto lenses also exhibit distortion.  I think this is a comparative distortion.  We tend to assess the perspective of the image by comparing it with our own vision which is equivalent to a 50mm lens on a 35mm SLR.  So a highly magnified images are  seen as flat and lacking depth compared to our native vision.

There are two types of wide angle lenses;  curvilinear (like a fish eye) and rectilinear (standard wide angle lens).  Perhaps you can think of these two lens as representing different projections used in an atlas.  Curvilinear lenses allow lines to curve with extreme perspective, and the edges exhibit foreshortening.  Rectilinear lenses on the other hand are designed to keep lines straight, and the edges may lengthen creating marked distortion of objects near the edges.  Despite the curved lines, curvilinear lenses exhibit less distortion of shape.   Rectilinear lenses on the other hand are the preferred option for architecture photography.

In architecture, drawings are used to convey information about an existing or proposed building.  Standard views of floor plan, and elevation in two directions are strictly 2 dimensional and can be used to measure lengths and angles with accuracy.  This is essential information for the builder.

Architectural photography often uses conventional forms, like 1 point and 2 point perspective.  Rather than true perspective the image is squared up to make the vertical and horizontal elements meet at right angles (1 point perspective).  This can be achieved by taking the photo from a perpendicular angle and standing a long distance away with a telephoto lens.

However this is not possible in many situations.  Buildings are often situated on narrow streets with obstructing elements.  If you can’t stand perpendicular the horizontal lines will converge.  When standing too close to a tall building,  the vertical lines will coverge.  It  takes clever placement to get everything right.  Whats more the lines may curve if you stand close with a curvilinear lens.

The old view cameras had the ability to tilt the film plane in respect to the lens.  Even when standing across the street from a tall building you can create a perpendicular image.  It is possible to adjust the tilt and see in the viewing window when the required elements were true.

In the era of dSLR cameras,  Cannon and Nikon have both designed tilt shift lenses that will allow you to square up the vertical and horizontal elements of an image, the same as the old view camera. They are unfortunately quite expensive.

It may not be necessary to pay a lot of money for a tilt shift lens.  You can always rectify the photograph in post processing software, like photoshop.

Square up architecture in Photoshop CS6 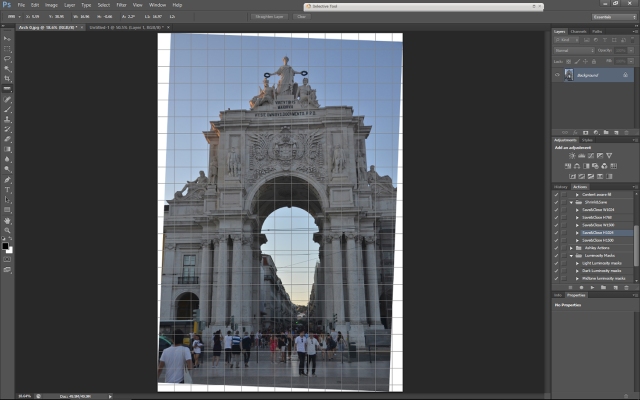 I frequently use photoshop to square up architectural images.  The short explanation is – I use the tranform “skew” tool.

Here is the long explanation.

The above image had a crooked horizon.  The first step was to straighten the image.  I find that it is always hard to know what element in the picture to straighten, especially if the true horizon is not visible (as in this shot).  In this image I chose the edge of the roadway at the bottom of the picture.  I laid a guideline along the edge with the ruler tool and then Image>Rotate>Arbitary – Enter.

I created a grid (View>Show>Grid) and inspected the top of the arch.  Not only do the columns lean inward, but the height is taller on the right.  In order to use the transform tool I have to either un-anchor the background (right click layer dialog >Layer from Background) or create a duplicate layer (right click layer dialog >Duplicate).  Once I have freed the background layer I open the skew tool, Edit>transform>Skew.  Four handles appear around the image.  One handle at a time I drag the image so that the archway lines up with the grid.  The first image below is the original, the middle image has had the horizontals aligned.  The final image on the right has both verticals and horizontals squared up.

The final image has 1 point perspective.  This is not natural but has been created in order to comply with convention.  The 2 point perspective in the second image is also quite  acceptable.  Which is the most pleasing?  I will leave that for you to decide.

Rather than stick with architectural convention, photographers have often used extreme and unusual perspective to create abstract and unusual architectural images.  Modern architecture in particular lends itself very well to unusual treatments.  Perhaps this is the point where Georges Braque and Pablo Picasso started, rejecting the conventions of the past.

I hope that this summary has been useful in understanding a difficult topic.