Bill Hensen is an Australian Photographer who’s works are displayed in the Guggenheim museum in New York  and the Bibliothèque Nationale in Paris, as well as the National Gallery in Victoria and Art Gallery of New South Wales.

“When you shoot on film, you don’t know whether you’ve got it or not until you get the film processed, and so it changes the relationship we have with the subject whether it’s a landscape or a person in a so-called controlled environment in a chair in a studio in front of you.”  Bill Hensen

He is famous for his landscape and portrait photography.  His style is moody and intense.  His portrait subjects are often young, adolescent, unclothed and surly.  The figures arise out of a black background, perhaps a little underexposed in a style reminiscent of the chiaroscuro technique from Italian renaissance painting.  In fact the photographs are very painterly.  Many of his pieces are presented as diptychs and triptychs.  He depicts the double nature of his subjects.  He frequently employs a flattened perspective through the use of telephoto lenses. The faces of the subjects are often blurred or partly shadowed and do not directly face the viewer.

Bill exhibits three times a year internationally and in Australia once every 2 years.  In 2008 controversy struck.  Following an email invitation to a private viewing of his work, 8 separate complaints were made to the police about his depictions of a nude 13 year old girl.  On 23rd May, Police descended on the gallery confiscating photographs to be examined and scrutinized for breaches of the child protection act.  Prime Minister Kevin Rudd made a public statement that he found the images “absolutely revolting”and that they had “no artistic merit”.

“You pick up a camera because something has been revealed to you in the landscape or in the human-scape. And you have no choice because it’s a gift. And it’s like, oh right, I better start doing this!”  Bill Hensen 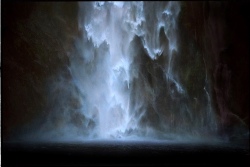 By the 6th of May the police had announced that they would drop charges and that there was no case to be answered for.   They were declared “mild and justified” and given a PG rating by the Australian Classification Board, suggesting viewing by children under the age of 16 is suitable with parental guidance.  The  director of the National Gallery of Australia released a statement,

“I’m very pleased that the public prosecutor has decided that it’s likely to end the debacle because they always do, as soon as you take art into court it never works … The court is not the place to decide matters of art.”  Betty Churcher

Bill continues to exhibit his work and exhibits in Australia every 2 years.