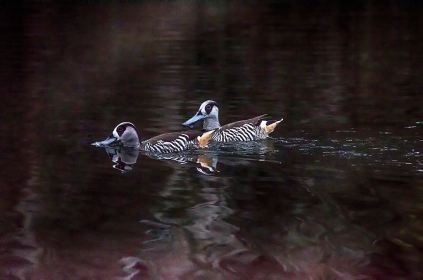 Pink ear ducks are usually quite stand-offish.  This night however they were quite animated, dabbling in the pond quite close to me.  The light was awful, well past dusk and my first few shots were horribly blurred.  So I decided to clock up the ISO, underexpose by 2 stops and managed to get some dark, grainy, but sharp images.

Have a look at the images above.  Which do you prefer?  The original image straight out of the camera is just unusable.  Processing the JPEG recovers a lot of the contrast, but there is a lot of colour noise and a red colour cast.  The RAW image however reveals a whole range of interesting tones that are just not apparent in the JPEG.  This is the superior image.

This article is about using RAW processing.  How is it that a dyed in the wool JPEG shooter like me is writing about RAW processing?  Don’t get me wrong I don’t defend or advocate JPEG images.  For years I have known that RAW has superior image handling properties to JPEG.  I had what I call JPEG guilt.  I was reluctant to tell people how I processed my images for fear that they would think less of them as a result.  However there are a multitude of reasons why I have not explored the RAW side of photography.

The files are just so damn big.  You need bigger memory cards, more hard disc space.  The windows explorer browser until recently would not show thumbnails of RAW images.  Even Photoshop has to process the images before opening them (in Camera RAW).  If your camera is new, you may need to search and download the RAW profiles for your camera before you can process it.  When taking bird photographs in rapid fire mode, the cache quickly fills with these large RAW files and the camera just staggers to a halt and stops taking images altogether.

Denis Smith changed my point of view.  Attending one of his workshops, he encouraged me to shoot in RAW.  “You are going to overexpose those highlights, but you can get them back in RAW.”  He was dead right.  Here was the JPEG image:

The bright lights on the new Torrens walkway just blew out all the detail on the bridge.  Whats more there was no detail in the dark areas of the grass and trees in the image.

When I opened the RAW file in Photoshop, it opened directly into “camera raw”.  I grabbed the highlight slider and dragged it all the way to the dark end of the range.  Likewise I dragged the shadows slider up to the bright end.  I darkened the exposure slightly.  Lastly I adjusted the black and white points according to the histogram, so that there was no clipping or unused gamut.  Here is the result.

It is amazing how much detail is recovered from the dark and light parts of the image.

So let me clarify what is going on.  RAW images are not sharper than Jpeg images.  They do not have more pixels.  They do take up more memory because they have more tones.   When you look at the unprocessed RAW and JPEG files they look very similar.   The computer has judged how the image should be displayed.  The RAW retains a lot of the tones that the camera sees but are not seen on your monitor.  Some may be between the colours on your computer monitor.  Some may be darker than black or whiter than white.   While the RAW file retains all these tones, the JPEG trims away the tones that are not displayed.  The JPEG has greater economy.  However if you process your image, as I did with the pink eared ducks, or the river Torrens bridge, you may want to use some of these hidden tones.  Too bad if they have been thrown away.  The JPEG lacks the versatility to recover tonal depth.

Here are a few more examples

This bird was a sihouette in the original image

So what do you do?  Let me walk you though the process.

You can do a lot of processes in Camera Raw.  Perhaps 90% of what you would normally do in photoshop, This includes sharpening, vignetting, noise reduction, straightening, cropping, lens correction and graduated filters.  I won’t explain all of these things.  I will restrict myself to describe what I think are the basics.

This image is overexposed and underexposed in parts.

Below is the Camera Raw window with my adjustments. 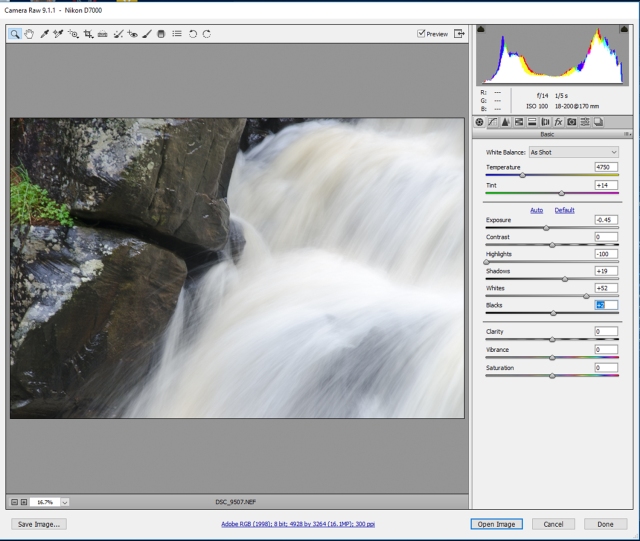 In Photoshop I might adjust sharpness as well as increase contrast with the curves tool.  The increased gamut of tones will persist in Photoshop after closing camera raw.  It is possible to undertake processes like tone mapping (NIK filters) without dramatic loss of quality.

Here is the final image:

I don’t think I will do all of my image processing in RAW.  However I am impressed by the ability to rescue images, especially in the dark and light tones.  I hope this has been helpful if you are like I was – a little uncertain how to start RAW processing.