When James asked if I would write an article for Camera Clips about architecture based on my  visits to Singapore, I was a little bemused, as whilst I have taken many shots of buildings in this  remarkable republic just a short distance from our “Top End” I didn’t think of myself an expert of this genre.

The founding father of this country was Mr. Lee Kwan Yu a gentle man with terrific foresight, once described by the British Colonialists as a “Thug” during his fight for independence. A man who I admired immensely for his honesty and drive.

My first visit to Singapore was in March 1972 while on my way to Australia with my wife, a couple of weeks after we married in England. My wife Rhonda was returning to her home country and I was migrating to the other side of the world. Now before anyone asks, No, I wasn’t a ten pound (£10.) Pom as I paid my own way to this great country. 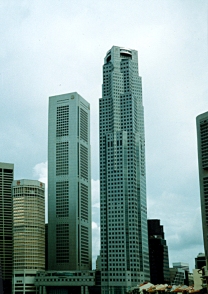 Bank buildings in the CBD 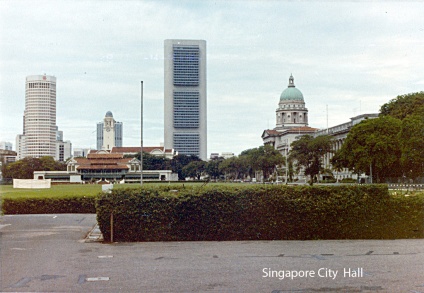 Back to Singapore………Due to Singapore being an island nation about the size of New York City space is in short supply so the “only way is up” in order to create the space required for your population as well as the room required for business. As the population increased pressure on the government, this caused them to embark on a huge reclamation program which has been a huge success although very costly. It is on this reclaimed land that many hotels and The Sands Hotel as well as Gardens by the Bay along with the Arts & Science Museum & “Theatres by the Bay” were built.  Theatres  by the Bay building resembles two microphones. One can possibly see where the SAHMRI architects got the idea from with the triangular coverings of this building. 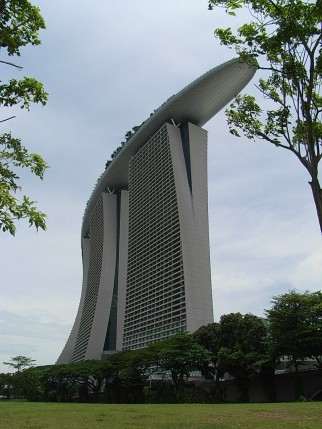 One of the Theatres by the Bay. 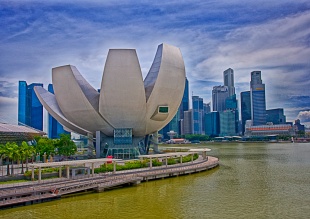 The jewel in the crown so to speak is without doubt the Marina Bay Sands Hotel this building is made up of three towers each 57 stories high and is topped of with a sun deck with swimming pool and viewing area, which spans all three towers and it’s size could hold 4 Airbus A380 aircraft side by side.

Designed by a Jewish/Canadian architect Moshe Safte and bankrolled by the owner of the Las Vegas Sands Hotel Group……..cost all up around 50 Billion US dollars !!!!!

Building in Singapore goes on unabated all year round despite the high humidity and thunder storms. Demolishing buildings and replacing them with something higher and bigger seems to be the norm. At the same time they are like moles and are busy tunnelling under the city in order to improve their MRT the Mass Rapid Transit system of underground railways.

There has been some effort to retain and upgrade a number of the old Chinese shop houses as well as some terraces but modernisation marches at a fast pace in this modern technically advanced nation. Old fashioned sentiment is not always considered here,… as efficiency is all important.

I’ve enclosed some samples of the buildings these are not exhibition quality only as a record of visits over many years.

Regarding what equipment I use the answer is, what ever I have with me at the time, if you like converging verticals or weird angles, shoot from low down with a wide angle lens (the wider the better for a more dramatic image).

For more reality get higher or shoot from a distance with a telephoto lens. It’s not always possible to get the shot you fancy due to confined spaces and or traffic. Morning and evening are usually best as side lighting can bring out the detail especially with old buildings which have more detail.

Some shots included were shot on Kodak Gold and I’ve scanned them so the colours and detail are not up to scratch as they were shot between 20-30 years ago. 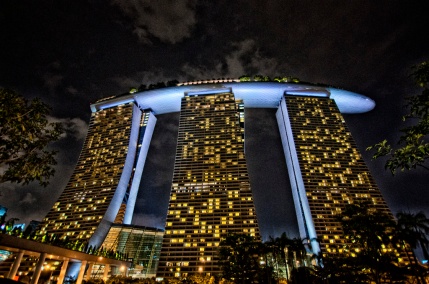 Super Trees in Gardens by the Bay

Hope this is alright James edit as you see fit.

That’s exactly what I was looking for.  I am totally gobsmacked by the rate of change in the buildings in Singapore.  I last visited in 2007 when my kids were in secondary school.  Here is what the city looked like then.  No Palm Sands Hotel or Science Museum or Super trees at that stage.  The 2 bay theaters had just been built not far from Hawkers corner.  Raffles had had its upgrade.  At that time the Merlion was the visual focus of the waterfront district. 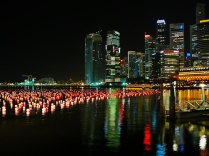 The Merlion at5 night