The reader may be asking “Why is there an article devoted to rollfilm holders”?

Well, we are a Club that caters to the wider photographic tastes of our members, and film is not yet dead!

I was pleasantly surprised at the Portraiture workshop 30th June 2016 to learn from another member that she’d recently purchased a Mamiya RB67 camera.  Yes, that’s right – another rollfilm camera. Is there a movement away from digital I ask?

These cameras, handled carefully (as any photographic equipment should be), will give virtually life-long service. Rollfilm cameras were the mainstay of most commercial and professional photographers for studio and wedding work until the advent of digital photography and many professionals are returning to film. Film is readily scanned to get digital images, and if there’s a computer crash the film is still available to do more scans.

The RB67, the RB67 ProS then the RB67 ProSD, are essentially mechanical cameras. Forget about inbuilt light metering, auto-focus lenses and the like. Everything is manual. That, inherently, means the photographer has full and total control over every exposure; from film choice, lens, filters, focussing, aperture and shutter selection. The photographer is required to consider all these factors before loading the film into the rollfilm holder, mounting the rollfilm holder to the camera, setting up and exposing the film. The photographer also takes full responsibility for any mistakes! Forget about “fixing it with PhotoShop”!

The Mamiya RB67 cameras are not designed for loading the film directly into the camera as you would 35mm, but rather into film holders (also called film backs) that are then attached to / removed from the rear of the camera body. The main benefit of this is that multiple rollfilm holders can be used, so switching films from mono to colour negative to transparency to infra-red can be done mid-roll or at any time a change of film is desired during a photo-shoot. Having several rollfilm holders is, of course, a requirement as each holder is loaded with one film type only at any one time. 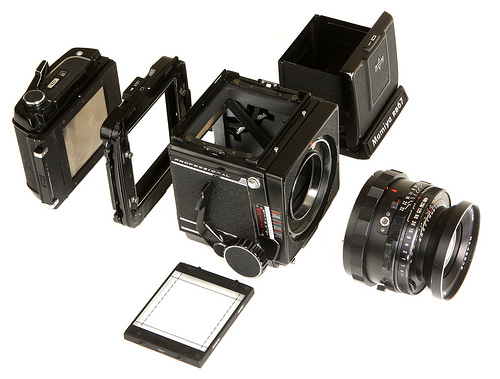 Prices will vary according to condition and type. A rollfilm holder in excellent condition will cost much more than one in poor condition. I was able to pick up a well-used one for about $20 from a seller in Randwick (Sydney). I knew from the price that it needed some work to make it serviceable, but the very low price and the fact that it was located in Australia and included the dark slide decided me. When I got it I could see it firstly needed a good clean. This improved its appearance, and then I re-painted some of the exterior black parts, which improved its appearance even more. The rear lid hinge was in good order (not much can go wrong with them), but the main reconditioning work needed, and the same applies to most second-hand RB67 film holders, was the replacement of the foam strips to make the holder light tight.

Unfortunately the foam inserts required to make the film holder light-tight deteriorate with age, and the RB67 and its successors the RB67 ProS and ProSD, are not “young” cameras, so finding a 2nd-hand rollfilm holder without deteriorated foam is rare. I’ve been lucky. When I bought my RB67 the two rollfilm holders that came with the camera were in almost mint condition, as was the camera and lenses. The two backs that came with the camera were for 6x7cm and 4.5x6cm negative size. Neither needed new foam inserts. Another ProS film holder I bought, via the Internet, was in very good condition but needed new foam strips. I bought a package of different thickness closed-cell foam at a moderate price (again via the Internet) and, using a metal ruler, a scalpel and Stanley knife, cut the strips off these and did my own reconditioning of the light-tight foam inserts. It’s a relatively simple job but very fiddly. It took more time to clean the old gunk out of the grooves than it did to cut and insert the new foam strips!

The later ProS rollfilm holders have some improvements over the earlier ones, however both are interchangeable between the RB67 and RB67 ProS bodies.

The Mamiya RB67 camera (in its various guises) isn’t easily transported due to its weight. It’s a bulky camera that has a reassuringly solid feel about it, and the normal lenses weigh about a kilogram each. It’s preferable to use a tripod but it functions quite well hand-held and I regularly tote it around in a camera bag, with just the 90mm lens fitted. 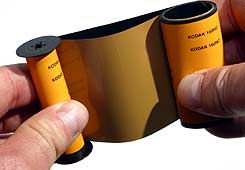 Another feature of a dedicated 220 film holder is the pressure plate behind the film is so very slightly further forward compared to a 120 rollfilm holder. Think about it: the backing paper on 120 rollfilm makes the combination of film plus paper just that little bit thicker. Using 120 rollfilm in a dedicated 220 back means the use of smaller apertures to extend the area of focus is needed. The focal point of the lens when using a 220 film back is fractionally behind the plane of 120 rollfilm because the thickness of the 120 rollfilm backing paper “pushes” the film fractionally forward. I have 2 Mamiya film backs that are switchable between 120 and 220 rollfilm.  The pressure plate is rotated depending on whether 120 or 220 rollfilm is used. This compensates for the different thicknesses, allowing the focal point of the lens to fall onto the front film surface for critical focus in both cases.

Interestingly, there’s also contraptions that fit the rear standards of 4”x5” view cameras that allow film holders such as Mamiya, Hasselblad etc. to be mounted on a sliding base. Inbuilt into the slider is a ground-glass screen that’s used to focus on the subject. The shutter of the lens of the 4”x5” camera, set open for focussing, is closed, the film holder slid across to replace the position of the ground-glass screen, then the dark slide removed in order to take the photo. Such a system expands the usability of a 4”x5” camera in cases where the photographer doesn’t have, or didn’t want, a 120 rollfilm camera, and would probably be something more useful in a studio. The intrepid photographer could take such an arrangement away for landscape use. If 220 rollfilm is used it also allows 18 images to be taken using the view camera. Developing one 220 roll of film is easier than 18 sheets of 4”x5” film.  Cost would be a consideration, but I think I’d prefer using the full 4”x5” sheet film in such cases. A benefit, however, is that the front and rear standards movements of most view cameras are there to be used with a rollfilm holder fitted to a view camera.

I purchased an auction lot that included three “Graphic 23” (Graflex) 120 rollfilm holders. These are designed to fit on various “Graphic” cameras including Speed Graphic, Crown Graphic and Century Graphic, all of which are designed for 4”x5” film. I put these aside as just more of my photographic junk hoard until I realised the plate to attach the holder to the camera was identical to the Mamiya rollfilm holder plate.  I decided to attach one to the back of the Mamiya.  Then, when I found it wouldn’t easily detach, thought I’d made a big mistake, especially if I was unable to get it off the back of the Mamiya without damaging the camera. The construction of the Mamiya includes a turret adapter to which the film holders attach. The turret that allows the holder to be turned 90 degrees (to quickly change between portrait or landscape configuration) is removable with the film holder attached, so I removed it to closer inspect the problem. I then realised the safety mechanism that prevents the ProS back from being removed from the camera unless the dark slide is in place inhibits the removal of the “Graphic 23” back. There is, however, two pins that, when pressed in, allows easy removal of the Graphic rollfilm holder. So now I have an extra three film backs in which to load different types of film. One of these I’ve been using for Agfa 25 ISO film and I attach this back when I want an image with extremely fine detail approaching that achieved with the now-discontinued Kodak Technical Pan (ISO 12) film. The downside is that I can only get 8 negatives due to the “Graphic 23” holder being intended for use on a 4”x5” view camera with larger negative image dimensions of 6x9cm. If I find an advertisement for one of those contraptions (see previous paragraph) meant for a “Graphic 23” holder to be adapted for use on a 4”x5” rear standard, I’ll be sorely tempted!

Once the holder is fitted to the camera the process of exposing each frame is two-step: The shutter has to be cocked using one lever on the camera and the film advanced by a different lever on the film holder.

When I mentioned earlier that the RB67 cameras are completely mechanical I was mostly right. There’s a prism finder that allows the light to be measured. The shutter and aperture settings still have to be adjusted manually. The benefit of a light-metering viewfinder prism is that, as the lens is racked out, the light metering adjusts for the altered “aperture”. E.g. the f/stops on lenses are only accurate for the lens set at infinity. This is so for all camera lenses, even those on digital cameras. Assume you have a 50mm lens set to f/8, and it’s racked out 50mm to take a photo of a small orchid. That f/8 then becomes an effective f/16, even though the lens ring still indicates f/8.  Using a 50mm extension ring between the lens set at infinity and the camera body produces exactly the same effective aperture as turning the focussing ring to rack the lens out by 50mm.

Automatic film-advance holders are also available for the Mamiya RB67 cameras. There’s dedicated 6×7 auto film advance backs for the Mamiya RB67 as well as 6×8 auto-wind backs, including those made for 220 rollfilm. All these take four AA batteries. When an exposure is made the film advances automatically to the next frame, thus preventing accidental or unwanted double exposures. The photographer then only has to use the shutter-cocking lever for the next image. The auto-advance can be turned off if deliberate multiple exposures are desired. I should mention that the ProS and ProSD cameras don’t allow accidental double exposures when using ProS or ProSD film holders, but twice I’ve been able to unwittingly circumvent that by accidentally pressing the double-exposure button, only to discover the error when I developed the film.

Here’s some images of the various film holders that I use on the Mamiya:

The top of the 6×8 auto-advance film back, with the pressure plate set for 220 rollfilm, as shown by the yellow indicator.

The top of the same 6×8 auto-advance film back, with the pressure plate set for 120 rollfilm, as shown by the white indicator. 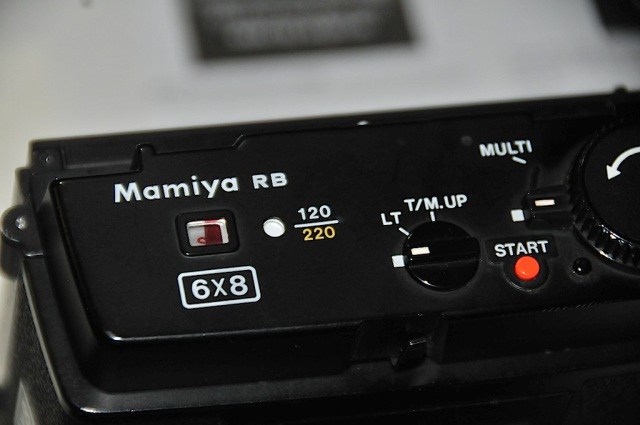 Four examples of film holders for the Mamiya:

The top plates of the auto-wind film holders, with the 6×7 at top and 6×8 at bottom. Shown also is the compact battery pack that fits snugly into the rear of these holders. 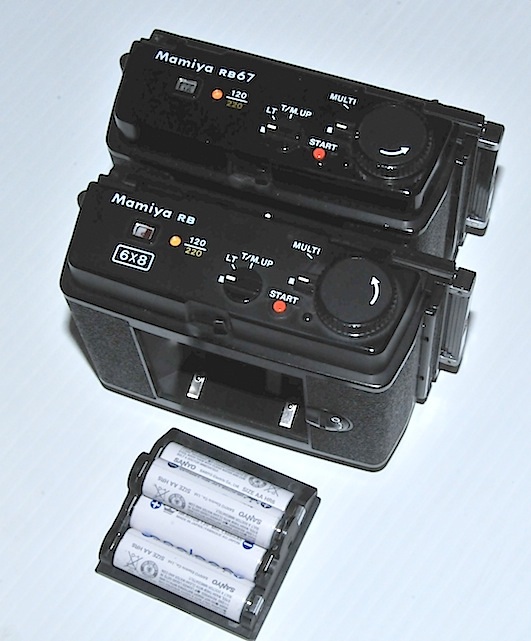