Welcome to the October 2015 edition of Camera Clips.  The banner this month comes from a fantastic photograph by Chris Schultz of the swimming pool at Coogee Beach. 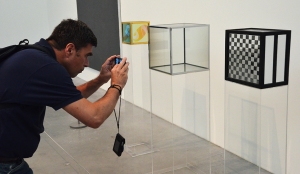 This edition is based on the concept of photographing art.  Should we photograph art?  In club competition it is regarded as a no no.  Well, is it?  There are inconsistencies in the way this is judged.  Some Judges allow pictures of art while others do not.   I know this is a major subject of discussion after many a competition.  So I went to the source and spoke to Keith Seidel who runs the judging school.  I asked Keith what he thought of photographing art.  I was quite surprised.  He permitted 7 out of the 10 test images that I ran past him.  I thought that he would reject more.  See what he has to say.  Mark Pedlar has also written his opinion on this dilema.  What does it mean when a judge decides that an image is a reproduction of someone else’s art?  You also have my take on photographing art. 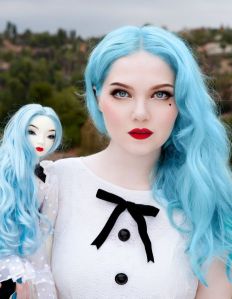 When researching this topic I discovered an example of what looked to be flagrant plagiarism by American artist Richard Prince.  When taken to court, he successfully pleaded “fair use”.  We are fortunate that in our midst we have a specialist in copy-write.  I asked Howard Schultze what he thought about this case.  Again a very intersting read.

Richard was able to appropriate other peoples photographs as this is one of the tennants of post modernist art.  If you are not sure what post modernism is, then there is a simple explanation in our style gallery.  I was intrigued to discover an interesting Adelaide twist to this story.

On the corner of Frome street and Rundle street is a large mural of a girl on a bike and a man eating an ice cream.  The original mural by Carol Ruff (an indigenous artist) was painted over by an Adelaide artist, Driller Jet Armstrong.  Personally I thought this was an improvement to the mural.  Driller is a post modernist artist who belonged to a home grown school of art entitled Daubism.  There is a short article on Daubism.  Daubism came to a sudden end when the Australian government amended the copy-write act to protect the “moral writes” of visual artists.  Howard Schultze also alludes to this act.  Read about this interesting story in the article on Daubism.

Jen Williams took a photograph of a coffee cup emphasizing the elongated shadow.  When she presented this at our critique night, Jen was worried that she might be criticized for plagiarism of a similar image by Olive Cotton.  As it turned out on the competition night, it was not criticized at all.  Out of interest I have prepared a short article on Olive Cotton for those who are not familiar with this Australian Photographer.

Lastly we have photographic journals from two recent club outings.  The first to Mannum falls, the second to Carrieton over the long weekend.

I hope that you enjoy this edition of Camera Clips.