12 Mistakes you can make in Photoshop

It is sad but true.  Once people suspect that your image has been manipulated in photoshop, they lose admiration for your photographic skills and your images.  Here is a collection of flaws that will give the game away.

Look at the sky in this sunset.  Instead of a continuous gradation of tone there is a series of bands of colour. Yuk.  This is caused by a lack of tones.  (like having too few colour pencils) Jpeg images have significantly less tones than raw images.  Normally you don’t see banding with a jpeg.  The eye cannot see the transitions.  However this may become a problem when you manipulate the image.  If you adjust the contrast in curves, the banding will become more obvious.  A Raw image gives you greater room to manipulate before this becomes apparent.

A watermark occurs when you make tonal adjustments to a sharp edged selection within an image.  The Corella was lightened using curves.  A rough selection was made around the bird with the lasso tool.  Unfortunately you can see a high tide mark where the  selection cuts across the background.  The selection can be feathered / blurred to give a softer edge to the watermark.  Alternatively (preferably) you can avoid the green blue halo by taking more care to select just the bird (and not the area around the bird).

The clone tool will always cause repetition in an image.  However when the repeated segment is distinctive (like this fissure in the bark), it becomes obvious to the viewer what has been done.  You need to break up repetition to give a more natural look.  Distinctive features can be broken into smaller pieces to make them look different.  You can try reversing or rotating the segment.  You can even try darkening or lightening the cloned area.

Sharpening a subject and blurring a background in different layers is a powerful way to make an image stand out.  If you are not careful you can create a ghost like halo of the subject in the blurred background layer.  (left side of the actor) This will dull and blur the edges reducing the impact.  However this can be avoided if you remove the subject from the background layer before blurring it. (right side of the actor)  This will restore sharp clean edges to the subject. 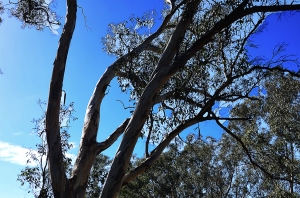 The sky in this picture has been darkened.  However between the branches of the trees there are islands of un-darkened sky.  The whole picture looks unconvincing and is a real mess.  This can be avoided by unticking the contiguous box when using the magic wand selection tool.  The areas between the branches would have been selected and a more natural darkening could be achieved. 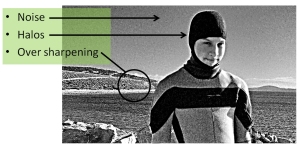 Grain like noise in areas of uniform tone, halos around sharp borders and high contrast textures are all hallmarks of over sharpening.  Try not to be heavy handed.  Sharpen selectively – just those areas that need it.  Adjust the diameter of sharpening in accordance with the image.  Refer to the article on sharpening for further tips on how to avoid these problems. 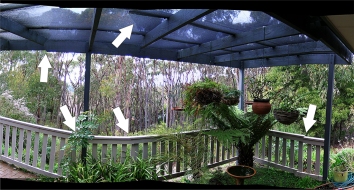 Stitched panorama software is pretty amazing.  It can match and join images that I couldn’t process by hand.  It can compensate for lens distortion and difference in exposure.  However it does not always go according to plan.  It seems to have more problems with wide angle lenses and paralax caused by objects very near to the camera.   Sometimes you are left with jumps and bumps in straight lines / blending errors and curved horizons.  All of these defects can (and should be) corrected in photoshop. 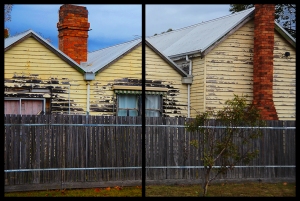 This one is a matter of taste.  A small increase in saturation can make an image stand out.  Overdo it and it looks like a tatty comic book picture.  What do you think?  Has the left of this picture been overdone? Or do you like the rich colours?  Remember that saturation can also be inadvertently enhanced by contrast enhancement in curves.  Skies in particular can go from blue to garish very quickly.

It is easy to get into routine.  I often make two handles on the curve dialogue at the 1/4 ad 3/4 points on the curve.  I drag the first one down a tad and the second one up a tad.  This gives a reproducible but pleasing result.  But all the images look the same.  Same old same old.   This is a mistake.  Sometimes a more severe treatment gives a more dramatic result.  Dragging the whole curve down to give a much darker picture, with just a silver thread of a waterfall works out better.  Don’t do it the same way each time.

This romantic scene looks pretty good at first glance, but there is something not right about it.  Can you tell? Well it is actually a montage.  The couple are sitting under a waterfall – not on a mountain top.  It has been quite skillfully put together with clever selection and even some shading on the rocks.  However there is a dissonance.  Matt Carr put his finger on it when he looked at one of my montages.  It’s about the quality of the light.  The lighting is all wrong.  The rock is lit by cool diffuse atmospheric lighting from the right, whereas the couple are back lit by a warmer light from the left.  I’m sure it’s obvious now that I point it out. The eyes can often tell even though the brain can’t articulate what’s wrong.  If you create montages – try to choose images with compatible lighting to reduce that dissonance.  It can be hard work – but worth it.

The upper left half of the picture has an uncorrected colour cast.  This was due to having the wrong white balance settings. Correcting the cast (lower right) brings out a broad range of colours and tones that were not apparent in the original.  I guess it’s a mistake to fail to recognise and correct a colour cast.  There are exceptions.  Sunsets and moody lighting are actually colour casts.  Correction will result in a loss of impact.

The old fashion contrast control (like on your TV) often results in clipping.  Clipping is where a range of tones are all given the same value.   All light tones become white, all dark tones become black.  It can result in blowing out of highlights (whites) and loss of details in the black.

The second half of the picture shows a preferable way to increase contrast; with curves.  Here the details are retained in the light and dark areas and no clipping occurs.  Learn to use curves to avoid blowing out the details in your images.