Why is my moon photograph blurred? James Allan

In 2012 I was trying to test out the capabilities of my new telephoto lens when I took these photos with my 200, 300 and 420mm lens.  (420 = 300 x 1.4 teleconverter) I was never really happy with the sharpness of the photos and thought I had some fatal flaw with my lens.  I have subsequently found that my lens  is actually quite sharp.  I suspect it was a fatal flaw with my technique.  I have written this article in case anyone else out there has the same dilema.  How do you get your moon shot sharp?

Actually these three images are cropped down to make the moon look larger.  The moon is actually quite small.  At 200mm (on the APS-C sensor) the moon is only 1/10 of the frame height.  That’s about the same size as a tennis ball around 8 meters from the camera lens. You need a big lens to make the tennis ball full frame at that distance.     Of course the 420mm has over twice the magnification and the image is much larger.  You really need to have a telephoto lens (200mm or larger) to take a decent shot of the moon.

The Moon is also quite bright.  I usually have my camera set to centre weighted metering.  With this setting the moon comes out over exposed.  That is if I take the photo at night with a black sky. The meter is trying to expose for too much blackness and not enough moon.  With a black sky I could get closer to the correct exposure by using spot metering.  Alternatively I sometimes put the camera into manual mode and take a test shot (Try the Sunny ISO 100 f16 1/125 rule) and adjust that aperture up and down until the image looks to be correctly exposed.  (Don’t forget to turn off automatic ISO compensation that will undo your hard work).  The exposure works out a lot better when I photograph the moon in a blue sky.  The moon has an exposure much closer to the blue sky.

I remember being told that the moon exposure is similar to a sunny day exposure.  This is quite surprising as it is often dark and it is certainly the wrong exposure for taking a moon lit landscape.

There is a problem trying to take both the moon and the landscape.  The moon is too small unless you have a long telephoto lens.  So you have to choose a moon rise or a moonset to get the moon close enough to the topography.  It’s hard work choosing a location that will put the moon in the correct location.  In addition you have to take the photo before sunset or after sunrise so that the exposure is correct.  This obviously takes a lot of planning.  There are websites that can tell you the time and direction of the moonrise.  http://www.timeanddate.com/worldclock/moonrise.html .  More often than not it happens totally unplanned.  I’m driving in the car, notice a brilliant moonrise and curse myself for not having my camera with me.

The other solution to this dilema is photoshop.  You can take a moon photograph with the correct exposure and then the landscape photo with another exposure and merge the two together.  Is this legal?  Plenty of famous people have done it.

Now there is also the hand jitters to account for.  I would suggest a tripod or monopod to steady the big lens.  They say to eliminate hand shake you should select a minimum shutter speed to be roughly the inverse of the focal length.  So for my 200mm lens that means I should select 1/200th or faster.  With the cropped sensor that is probably more like 1/300.  The monopod and image stabilization will reduce this requirement a tad.

Lastly I discovered that the UV filter on my lens was causing some ghosting – so I took it off.  Here is the shot I was able to get a few nights ago with these settings: 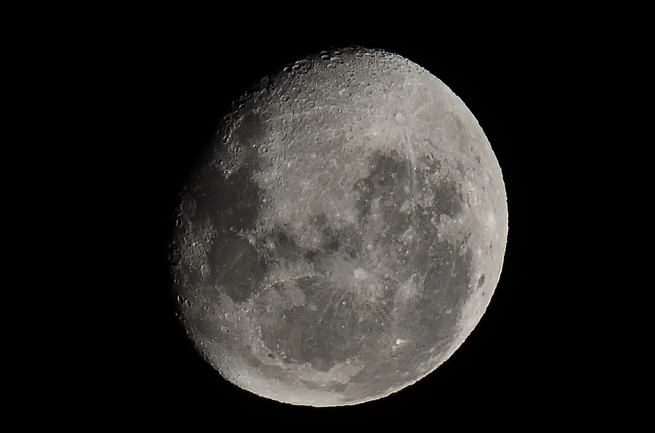 Lastly a few observation about the moon and the moon photographs.  The shadow moves from left to right.  Thus a waxing moon has the shadow on the r

ight and the waning moon on the left.  When there is less than half a moon it is said to be a crescent moon, when more than half a gibbous moon.  The moon will tend to rise a little later each night.  So if you want to photograph the full lunar cycle you may start with a full moon at 8pm, but end up 2 weeks later photographing the slimest crescent moon at 5am.  The sun striking the moon at a sharp angle gives great definition to the craters on the shadow side.  (on the left of my photo) Some people have used this phenomenon to create a detailed moon atlas.

There are plenty of opportunities to photograph the moon, one every night theoretically.  Be creative.  Turn difficulties into opportunities.  Try and make your moon photos a little different.  If at first it doesn’t work out, be prepared to try doing it again differently.